PROPERTY OF THE MONTH: UP at Metroplex: ‘New Benchmark for Student Housing’

In this issue, Broadband Communities showcases UP at Metroplex, a student-housing complex in Vestal, N.Y. As part of an overall renovation, Newman Development Group, the property owner, installed state-of-the-art wired and 802.11ac wireless broadband infrastructure that will meet student needs well into the future. Thanks to Jerry Wojenski of Newman Development Group and Andrew Marshall of Campus Technologies for providing the information for this profile. 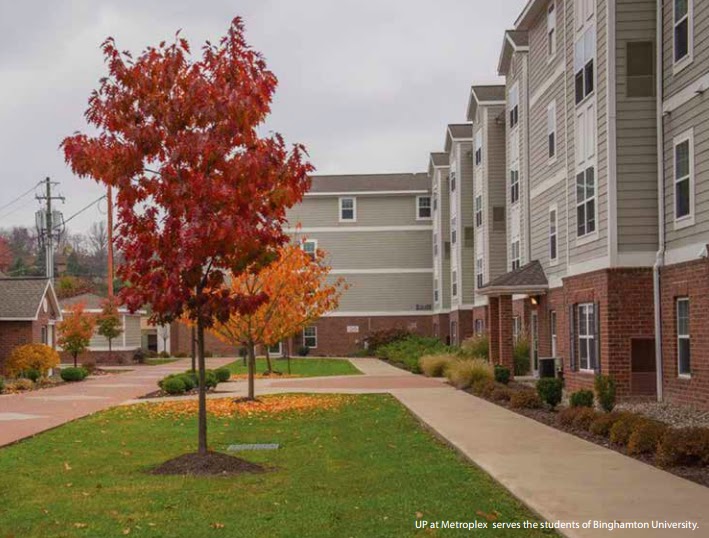 Back in the early heyday of student housing, the Newman Development Group (NDG) developed a student-housing project in its hometown of Vestal, N.Y. The housing was intended to serve students at Binghamton University, part of the SUNY system. NDG partnered with the property manager, Ambling Management Group, and the owner, Binghamton University Foundation, to build the fourbuilding complex, then called University Plaza.

The property was advanced for its time – it was completed in 2004 and opened in 2005 – and was popular with students. A decade later, however, it no longer looked so advanced. The clubhouse was small, the amenities were unimpressive, the furniture and appliances showed signs of wear and, most important, the broadband was not up to par.

A cable company provided Internet, video and phone services to the property, and there was no propertywide Wi-Fi service. Cable modems hung from the walls of the units. There were continual problems with connectivity and reliability. “Students can live without a lot,” says Jerry Wojenski, executive vice president of NDG Student Living, “but they can’t live without Internet service.”

Students are avid movie watchers and gamers, and they increasingly rely on broadband for coursework. Wojenski explains, “Binghamton tries to get its students to graduate on time, and it maximizes the experience by keeping class time dedicated to lectures and hands-on research. After hours, the students complete their coursework through Blackboard [a learning management system] and do their quizzes online. To take a quiz online, a student needs reliable Internet service.” In addition, students do most of their research online today. “No one goes to the library anymore!” Wojenski says.

Eventually, the foundation decided to exit the housing business, and in August 2014, NDG, which by then had developed many other student housing projects, purchased the property and decided to bring it up to date.

“The first thing on the list to take care of was to completely modernize the connectivity to provide new Wi-Fi and the best service out there,” Wojenski says. NDG turned to Campus Technologies, a leading technology provider to both on- and off-campus collegiate housing, to design, construct, operate and support the new network. NDG had worked with Campus Technologies on a previous student housing project, and Wojenski describes the technology solution there as “innovative.” This time, NDG presented Campus Technologies with a formidable challenge: completely replacing the technology solution over the students’ winter break.


Campus Technologies realized that, to meet students’ needs, the property would need a fiber backbone. Before winter break started, it secured a 10 Gbps-capable fiber from Level 3 Communications, which is terminated in one building of the complex. It then laid fiber to the other three buildings so the entire property could be managed as a single network and students would have Wi-Fi access wherever they were in the complex. That left less than three weeks for all the inside construction and for delivery of a fully functional system.

Because students use both mobile devices and desktop computers, the wired and wireless networks both had to be powerful and reliable. (Andrew Marshall, CEO of Campus Technologies, estimates that students spend the great majority of their time on the wireless network, but he says the wired network provides the best performance for “hardcore video streaming.”)

Two factors enabled the construction team to meet this demanding schedule. First, NDG had wired the property with Cat 6 cable back in 2004. The Cat 6 had never been used because all services had been delivered over coaxial cable, but it was still mostly in good condition, and Campus Technologies didn’t have to do much inside wiring.

Second, Campus Technologies worked with Motorola Solutions to identify a Wi-Fi access point that could be plugged into an Ethernet jack in a wall plate. This eliminated the necessity to drill holes and run wires for the wireless network. The result? Campus Technologies finished the installation early, and its team members even got to celebrate the holidays. Answers to questions below are by Jerry Wojenski unless otherwise identified.

VITAL STATISTICS
Property Description: UP at Metroplex is a 186-unit, 710-bed, off-campus student housing community that serves the students of Binghamton University. Built in 2004, the community consists of four buildings in a college town retail shopping center. The property was acquired by the current owner on August 14, 2014. After the acquisition, the new owner decided to invest in a major renovation. On top of the list of renovations was upgrading the network and providing communitywide Wi-Fi service for the first time.

Other renovations included new fixtures, appliances, and furniture as well as amenities that include a new clubhouse, an arcade room, a fitness center, a courtyard with a barbecue area and a smartphone-operated security system.

Time to deploy: Planning for the new network began in late October 2014. The fiber circuit was delivered on December 15, 2014, and the network became operational in January 2015.

BUSINESS
Who owns the network? Wiring infrastructure, fiber, switches and wireless infrastructure are owned by the property. Network benefits: Since the new network launched a few weeks ago, five residents renewed their lease agreements, and there have been many glowing reviews about the quality and speed of the new network.

TECHNOLOGY
Wired broadband architecture: 10 Gbps fiber to the property demarc (main distribution frame, or MDF), single-mode fiber between the MDF and building demarcs (intermediate distribution frames, or IDFs) and Cat 6 copper home-run from the IDFs to a wall plate in each bedroom. Switches are from Juniper Networks.

Wireless broadband architecture: Motorola Solutions AP-7502 Wi-Fi access points that use the 802.11ac standard. Andrew Marshall, CEO of Campus Technologies, explains the technology choices: “More Internet-based video streaming and new formats such as 4K TVs and media players also mean more capacity is needed in the access and core Ethernet switches, which led us to use Juniper switches for this project. These robust switches will give us much greater flexibility to adapt to ongoing challenges without having to re-tool and re-invest. “With student residents each having up to 10 Wi-Fi devices, traditional Wi-Fi network deployments simply cannot cope. We have increased the density (the number of access points) dramatically compared to two or three years ago. It’s also vital to implement extensive management tools for those access points to guard against coverage and interference challenges and maintain uptime.”

LESSONS LEARNED
What was the biggest challenge? The existing network consisted of a residential-class Internet modem installed in each apartment. No Wi-Fi service was provided, and students were using personal wireless routers to compensate for the lack of Wi-Fi.

We knew going in that these routers posed a huge problem for the new Wi-Fi network and that it was going to be very challenging to have these routers disabled. Both the property management team and Campus Technologies sent multiple emails and literature instructing residents to disconnect their personal routers. While many followed our instruction, there are still a few personal routers causing minor interference on the network.

What was the biggest success? Given the short window to deploy a completely new network and Wi-Fi service, there were no major issues in the installation and commissioning of the network. The project was completed ahead of schedule, and the service has so far been very reliable, seamless and lightning fast. Students migrated to the new service with ease, and their reaction has been extremely positive. Campus Technologies’ expertise led to a well-designed, planned and executed network.

What feedback does the leasing office get from residents? Residents have been raving about the new Wi-Fi service. They are pleased at how easy it was to access the new service, and they are blown away at the lightning-fast upload and download speeds on the Wi-Fi network.

When the project was first announced, many residents expressed concerns about migrating to a new service. Although they had numerous complaints about the existing provider’s customer service and the reliability of the service, the old ISP was the devil they knew – they worried that perhaps the new service could be even worse.

The leasing team mobilized a marketing campaign to educate residents about the new service, in particular highlighting how the new service would elevate their digital lifestyles. We found that educating residents converted many from doubters to believers. Soon after the campaign launched, residents were posting messages on Facebook and reviews online showing their excitement for the new Internet service.

What should other owners consider before they get started on a similar deployment? In deploying a new network, we considered three major questions:

1) What type of system do we need not just for now but also for five years from now?
2) When should we schedule the deployment?
3) How can residents migrate to the new network?

Although we could have saved money by sticking with a traditional network, we wanted to provide a service that would be current and relevant five years from now, so we opted for the more expensive 802.11ac network. We also realized that students have, on average, at least four or five network-enabled devices, and their consumption of bandwidth will continue to grow significantly. Looking forward to future bandwidth needs, we chose to go with a robust 1 Gbps pipe that is expandable to 10 Gbps without any hardware changes or upgrades.

When scheduling a deployment in student housing, timing is critical. Students rely on the Internet not only for recreational use but also for online assignments, research and quizzes. Any interruption of service would be disastrous and could hurt the property’s leasing efforts. The best time to deploy a network is either over the extended summer break or over the winter break. It is important to communicate hard deadlines to vendors, especially to the fiber provider. When the circuit is delivered is critical to the timing of the whole project. You must also be conscious of the lead time vendors need to purchase and receive the equipment needed to install the new network.

Last, it is important for the service provider to work with the property’s management team to develop a comprehensive marketing campaign educating residents on the new network and the changes they should expect to their service. The leasing team should communicate with residents before deployment, during the installation process and after the new network is deployed.

###
Masha Zager is the editor of Broadband Communities. You can reach her at masha@bbcmag.com. For more information about Campus Technologies, call 888-288-2587, write to info@campustech.net or visit www.campustech.net.